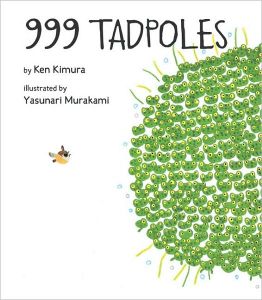 I admit it; I initially chose this book because the cute little painted frogs were so adorable that I couldn’t leave it out of storytime.  However, the story itself also works well in a group setting.  Mr. and Mrs. Frog have 999 tadpoles who grow into 999 frogs, and their pond home suddenly becomes way too small!  So they go off on a journey to find a new home and run into both a snake and a hawk on their way.  Before reading this, I asked the children if they knew what tadpoles were, and many of them did know that they’re baby frogs.  This would be a good book to include if you’re ever talking about life cycles or food chains to little ones.  But, of course, it works great with a frog theme too!

I used this prop to go along with the classic song.  My Wednesday session only had one child in it (we get 20-30 most weeks, so it was very strange to have only one), so I sat down beside her and we sang the song together and I had her turn the frogs down into the water.

Book #2:  Too Many Frogs! by Ann and Josh Hassett

Another story about numerous frogs!  In this one, an old woman is trying to bake a cake, but her home is continuously invaded by too many frogs!  She puts them in glasses, pots, her washing mashine, the bath, etc. untill she finally just floods her basement so that all the frogs can live down there.  My big group of children on Tuesday loved shouting out ‘Too many frogs!’ with me.  The little girl on Wednesday was more shy, so Quacky and I shouted it out together.

Stick is a young frog, and his sticky tongue latches onto a dragonfly one night and…well..sticks.  The dragonfly takes him through the swamp and into the city where stick gets stuck on different moving objects before finally returning home to his mother at the swamp.  This was a cute story, that had the kids laughing at the end when Stick eats a firefly and lights up.

Activity #2:  Frog in the Pond

This is a very short action rhyme that the children really seemed to enjoy.  We did it several times before hopping back to our seats for our puppet show.

The kids had a good time trying to convince Mr. Crocodile that he was not a frog.  And there were lots of laughs when the Princess had to kiss him!